Two days after Covid-19 cases in India crossed four million, the country reached another grim landmark on Sunday when it overtook Brazil to become the nation with the second highest number of infections. India now stands behind only the United States in the case tally.

The development comes at a time when India has recorded the worst daily case trajectory seen in the world. In five days out of the last eight, new cases of the coronavirus disease in India have set new global single-day records. 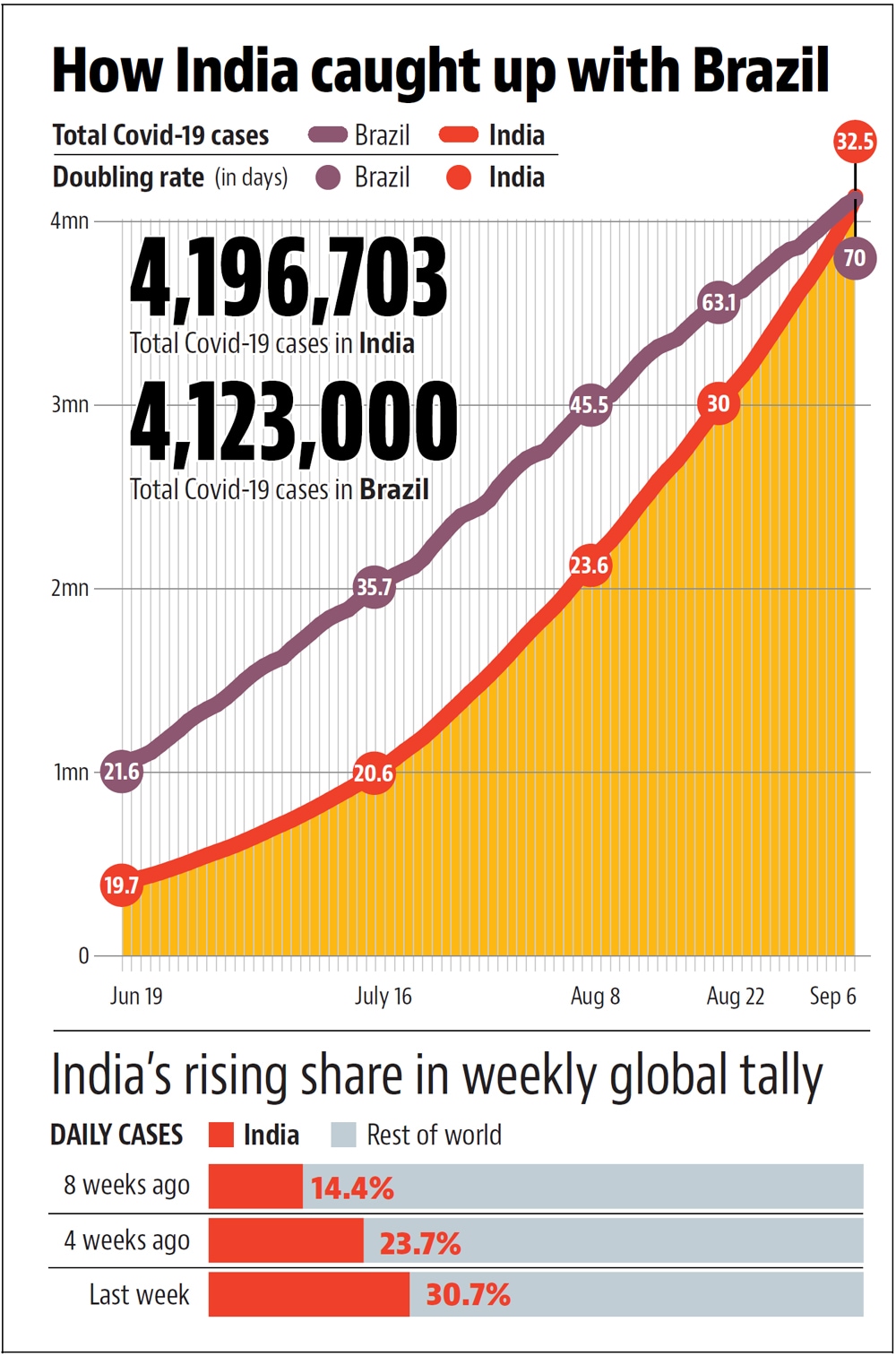 India is also increasingly becoming the main force fuelling the global Covid-19 tally. Nearly 31% of new cases reported across the world in the past week have come from India; in other words, nearly one in every three new cases in the world can be traced to India. Four weeks ago, India’s contribution to the global tally was only 24% and eight weeks ago, it was 14%.

Although India on Saturday night had briefly overtaken Brazil’s total caseload when it touched 4,106,483 infections against the latter’s 4,091,801 on Saturday night (India time), however, once Brazil’s tally for Saturday came in, the South American nation retook the second spot with 4,123,000 infections in the early hours of Sunday. On Sunday night, with a total of 90,220 new cases taking the India’s tally to 4,196,703, it now has a lead of over 73,000 cases on Brazil, which is unlikely to overcome this gap as it has been reporting an average of 39,400 daily cases over the past week.

India’s doubling rate — the number of days it takes for number of infections to double — in the country now stands at 32.6days. For doubling rates, a higher number means that cases are growing slower in a region.

Cases in Brazil, however, have dropped significantly from their peak and the doubling rate is around 70 days, so if the trajectories in the two countries remain similar, India is likely to open up a wide lead on the South American country over the next few weeks.

The resurgence of cases in the national capital, meanwhile, continued as Delhi recorded 3256 new cases, the highest since June 26 on Sunday, taking the total number of cases in the city to 191,449. Nearly 36,046 tests were conducted in the last 24 hours — 9,217 RT-PCR others and 26,829 rapid antigen tests.

To be sure, the US remains the worst-hit nation with 6.4 million cases as of Sunday night, so India may not be closing the 2.3 million-case gap any time soon.

With 983 new fatalities reported on Thursday, a total of 71,647 people have died due to the disease in the seven months of the outbreak in the country. The death count, however, is one of the areas where India has performed significantly better than other similarly hit nations. India’s case fatality rate (CFR) is 1.7% —better than not only than the global average of 3.2%, but also that of the US and Brazil – both 3%.

Actives cases in India, however, outnumber those in Brazil. A total of 880,790cases (21% of total infections) in India are active, while 700,068 infections remain active in Brazil (17% of total cases).

In all, Covid-19 cases have been reported in at least 210 countries since the disease was identified in China’s Wuhan city in December 2019. After a rapid initial spread, China controlled the outbreak by the end of February and has since dropped to the 38th place globally, with 85,122 cases. However, by then, the virus spread to several other countries, particularly in Europe. Italy became one of the earliest hot spots of the outbreak in Europe along with Spain, the United Kingdom and Germany.

The World Health Organization declared the Covid-19 outbreak a public health emergency on January 30, 2020, and a pandemic on March 11, 2020.